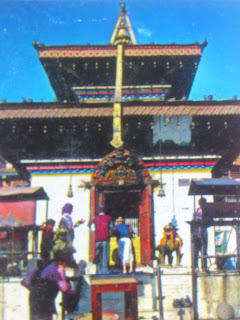 On the very close to Kot square lies a beautiful pagoda shaped two-storeyed temple called Mahendreswor Temple. The temple is dedicated to lord Shiva and was built in 1562 AD by King Mahendra Malla of malla dynasty. A legend states that King Mahendra Malla use to visit Pashupatinath Temple and pay homage every day before his meal. It is said that, one night he had a dream where Lord Pashupatinath adviced him to build temple near his palace so that people who are not able to go to Pashupatinath can worship there. So, as per the wish King Mahendra Malla built this beautiful temple and named it Mahendreswor Temple by adding his name. Since the temple was built by the advice of Pashupatinath, this temple is also called mini Pashupati.  Everyday many hindu devotee visit this temple to worship.

For more information about temples in Nepal, Please do visit  http://nepalonetours.com/temples-in-nepal
Posted by Nepal One Tours and Travels at 11:13 PM No comments: