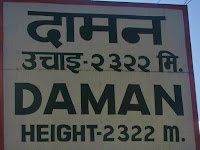 Located at Makwanpur District (Thaha Municipality), lies a small but a beautiful hill station Daman. It has been one of the favorite destination for the local tourist from all over Nepal. It is approximately 80 km on south-west of Kathmandu at the height of 2322 meters above sea level. This place has been one of the best place to view the Mountains, to enjoy weekend holidays or to organize picnic for the people from Kathmandu, Hetauda and the people living around Daman. Every year in winter season snowfall occurs in this area, where the long line of people visiting this place to play and enjoy snow can be seen. 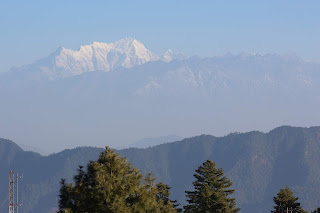 This place offers the wide panoramic view of Himalayan range from east Mount Everest to west Dhaulagiri. From the view point Simbhanjyang (2488m), almost complete Himalayan range can be seen. Annapurna, Ganesh Himal, Manaslu, Langtang, Gaurishankar, Dorjelakpa, Choyu and many other Mountain that can be seen from here which provides the heavenly pleasure for anyone. There is also a view tower from where one can enjoy the view from Telescope.

Daman is also equally famous as the religious site. Lots of Hindu and Buddhist devotees visit this place to worship Risheshwor Temple. Hindu worship this deity as an incarnation of Lord Shiva/Mahadev whereas Buddhists believe and worship as a Padmasambhava. Nevertheless the peace and harmony between two different religions can be seen here. 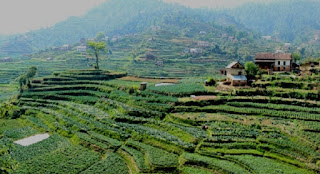 Beside this, near to Daman there lies another beautiful tiny village named Palung. According to local people, the name of this place was originated from the big stone which is still there.  In Newari language Pa means big and Lwahaa means stone. So, the name of the place was Pa Lwahaa which later became Palung. It is considered as one of the ancient market of the Makwanpur region with the vast majority of Newari group of people living here.  It is also famous for agriculture. Almost 90% of the people living in this area are farmers and remaining are in hotel business, abroad work and other. Every year the farmers produces the huge amount of rice and vegetables like cabbage, cauliflower, radish, carrot and many more as per the season.

Hence, Daman has always been one of the preferred location mainly for the Domestic tourist. Also it has a wide possibility of being one of the top destination for the International Tourist in near future. The majestic view, cool climate, pollution free surrounding, ancient history, culture, agriculture and many other features has made this place attractive and unique.


Posted by Nepal One Tours and Travels at 5:03 AM No comments: