After reaching Mul Chowk/Mul Courtyard in Patan DurbarSquare, there is another small door on the south part which leads to a most magnificent courtyard named Sundari Chowk/Beautiful Courtyard. The name itself describes the beauty of this courtyard. It is surrounded by three-storeyed building from all side with the best example of an ancient wooden architecture on its doors, windows and tympanums. On the center of this courtyard lies a waterspout known as Tusha Hiti. The stone engraved idols of various deity around the spout are much worth to see. On top of the spout there is a small stone temple believed as an architectural model of famous Krishna Mandir. Also, there is a huge stone in front of waterspout which is said to be the bed of King Siddhi Narsingh Malla where he use to meditate. 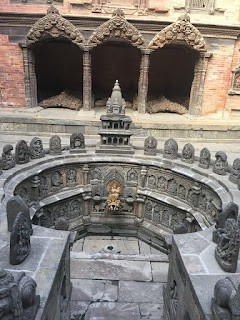 Nepal One Tours and Travels is organizing guided sightseeing tours everyday in February and March 2019.

Posted by Nepal One Tours and Travels at 11:02 PM No comments: