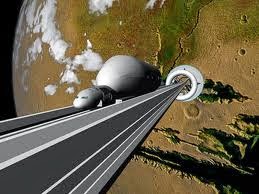 Recently their came the news about the elevator connecting earth to the space. The space elevator is said to be constructed by the Japanese construction company called “Obayashi”. This elevator can reach up to 96,000 kilometres (60,000 miles) into the space. The news seems to be interesting as well as exciting. Many of you may be thinking is this possible or if this plan become successful then what will be the situation?
Every one dreams of going to the space once in their lifetime isn’t it....?
According to the tourism point of view we can see a lot of potential. Many of you may want to travel to the space but at the same time you must be wondering about the expenses but if the elevator idea becomes successful then expenses may be less. At the same time travelling to the moon also may be successful as well as inexpensive too. There will come a new twist in the field of tourism. Let’s just imagine people travelling to the space for their vacation how does it sound isn’t it wonderful? Due to the science new technologies are been discovered which have made humans life easier. The space elevator idea will even cut the distance between the earth and the space.
If everything goes according to the plan then it may be successful....let’s be optimistic.

If you are travelling to Nepal feel free to consult with Nepal's number one tour company to arrange your advance nepal tour booking
www.nepalonetours.com Nepal Tour,Tour Nepal,Travel agency in Nepal
Posted by Nepal One Tours and Travels at 3:32 AM No comments:

October month is the best month to travel in Nepal. This month is fairly dry and pleasant. It is considered as the best month for trekking, rafting and sightseeing. The weather is clear with mild to warm days and cold nights.

This month lies in the autumn season where you can see and feel the greenery of country sides, clean sparkling air and the perfect Himalayan views all around. Also you can entertain yourself by doing different activities like Jungle safari, short hiking or overnight stays in the Nagarkot & Dhulikhel for the best views of the sunrise and the sunset.

Pokhara is recommened for the best spot as it is known for the romantic city of Nepal. Pokhara is often called the enchanting Himalayan valley with a heart of major action and adventures. In the morning time you can see the reflection of sunlight from a mountain is always a breathtakng site that you will never forget the sight of the fishtail mountain standing right before eyes.  Sarangkot is the most popular destination where you can enjoy the magnificent view of the mountains and the great view of Pokhara valley. Many tourist comes to Sarangkot for sunrise view and goback after few hours but it will be good if tourist stay there for one night and enjoy the view and city light of Pokhara from Sarangkot. Paragliding can also be done from Sarangkot that you can enjoy on the spot. During the Dashain festival Kathmandu valley is less crowded than usual, as most of its inhabitants will literally be flocking out of the valley to visit their families in remote villages for this festivals. Nepali people wherever they live, they try to reach home to celeberate Dashain festival together with their family.

This is also the best seasons of festivities as Nepal celebrates the biggest & longest festival of Hindu, Dashain followed by Tihar which falls on the month of October. Dashain is regarded as victory of truth over the evil. It is a celeberation of victory of good over bad. It is the longest festival celeberated for 15 days, the most important days are the 1st, 7th, 8th, 9th, and the 10th. 1st day is known as Ghatasthapana, 7th day is fulpati, 8th day is Asthami, 9th day is Navami and the 10th is Vijaya Dashami main day of Dashain where people worship goddess Durga and visit temples. There is tradition of buying and wearing new clothes and having big feast in this festivals. Dashain is the longest holiday in Nepal, Nepal government closes all the government office as well as educational institutions and other offices. During the festival time you can see people of all ages, children in their roof flying colourful kites of different shapes and voices shouting out. Bamboo swings are constructed with the help of community members using traditional methods during this festival where you can find local people, children having fun by playing swings.

If you are travelling to Nepal feel free to consult with Nepal's number one tour company to arrange your advance nepal tour booking
www.nepalonetours.com Nepal Tour,Tour Nepal,Travel agency in Nepal
Posted by Nepal One Tours and Travels at 3:24 AM No comments:

Bishwakarma Puja is being celebrated in Nepal


Today is the day of Lord Bishwakarma. ‘The bishwakarma Puja’. God Bishwakarma is considered as a god of construction additionally god of tools, equipment and machinery in the Hinduism. According to purana, Lord Krishna asked Bishwakarma to build the Dwaraka City, and following Kishna’s order, Bishwakarma was devoted to build the best city. On the other occasion bishwakarma is also said he had built a weapon from a Dadichi Rishi’s bone without hurting the Dadichi Rishi.
It is believed that those who worship and does the bishwakarma puja on this day will bring prosperity and progression on their job and business of machinery, tools and equipment. One interesting part of this festival in Nepal is, Bishwakarma puja is the only one festival which the day is determined according to Nepalese monthly calendar instead of lunar calendar of Hinduism. It is celebrated in 1st day of 6th month of Nepalese calendar which is on the 17th September on the year 2014. Finally another interesting side of this festival is this festival is not associated with any temple unlike other remaining festivals of Nepal. Instead of temple people worship on their home, factories, office, workshop by creating and worshipping Lord Bishwakarma of their own.
This festival is celebrated widely in the every corner of the country on the factories, workshops, plants, machinery warehouse and parking garages. The factory workers and machinery workshop workers, bus and truck drivers are the ones who celebrate this day with full of devotional enthusiasm. They decorate their workshops, factories, buses, cars with flowers or other paper decorative after special cleaning of the place followed by the puja with abhir, keshari, rice grain, fruits, traditional batti (lights) and incense stick. After they does the puja, they party with loud music, bjanan (srligious songs) with dnncing and drinking and with heavy meal with special items. Today they shut down all their work on factory and warehouse. They also drink alcoholic beverages to enjoy the day of bishwakarma.
Due to the puja there will be lack of public transportation on the streets because after the puja the owner do not drive their taxi, bus, truck. But people of Nepal kknow about this and they are prepared with the transportation situation on the Biswakarma puja day.
If you are travelling on the mid of the September please do not forget to ask your travel agency to arrange the bishwakarma puja observation during your tour in Nepal. One thig we gurantee that if you visit in any puja or participate on celeberation you will be offered free local foods. Nepalese like to treat freely with foods and drinks on their festival day, which is something good seceret to know to travel Nepal, isn’t it  ??

If you are travelling to Nepal feel free to consult with Nepal's number one tour company to arrange your advance nepal tour booking
www.nepalonetours.com Nepal Tour,Tour Nepal,Travel agency in Nepal
Posted by Nepal One Tours and Travels at 1:22 AM No comments:

From mid-September to November it is the best time to travel in Nepal. Autumn seasons starts in Nepal from the mid-september which is the best season to travel Nepal because of its likelihood of getting clear skies best for mountain photography as monsoon rains and clears out the dust and pollution from the air which make the valley looks magnificent with blooming flowers. The weather starts to get stable and reliable. September month is probably known as the better time to visit in Nepal since it marks festival seasons with lots of lights and music on the streets of Kathmandu.

Many interesting and colourful festivals takes place in Kathmandu valley in the month of September. Teej, Yenya (Indra Jatra & Kumari Jatra) and Biswakarma Pooja which are the popular festivals of Nepal that is celebrated in the month of September. Teej is a colourful fasting festival which is celebrated by the women of Hindu community. On the special occasion of Teej you can find women dressing in red bright costumes and bridal dresses participating in traditional rituals and dances in the temple of Lord Shiva. Yenya means the Kathmandu festivals which is the celebration of both Indra Jatra and Kumari Jatra. It is the largest festival in Nepal which expects huge crowd in Kathmandu especially in Kathmandu Durbar Square. In this festivals you will get to see the living goddess of Kathmandu blessing people on her from chariot and people pulling tall pole on a chariots.Biswakarma puja is a worship of lord of architecture or engineering, Lord Biswakarma. On the day of Biswakarma Puja you can see people worshiping their vehicle along with machinery. Red and white cloth and holy treads are offered to vehicles and machinery in this day.

If you are travelling to Nepal feel free to consult with Nepal's number one tour company to arrange your advance nepal tour booking
www.nepalonetours.com Nepal Tour,Tour Nepal,Travel agency in Nepal
Posted by Nepal One Tours and Travels at 3:49 AM No comments: 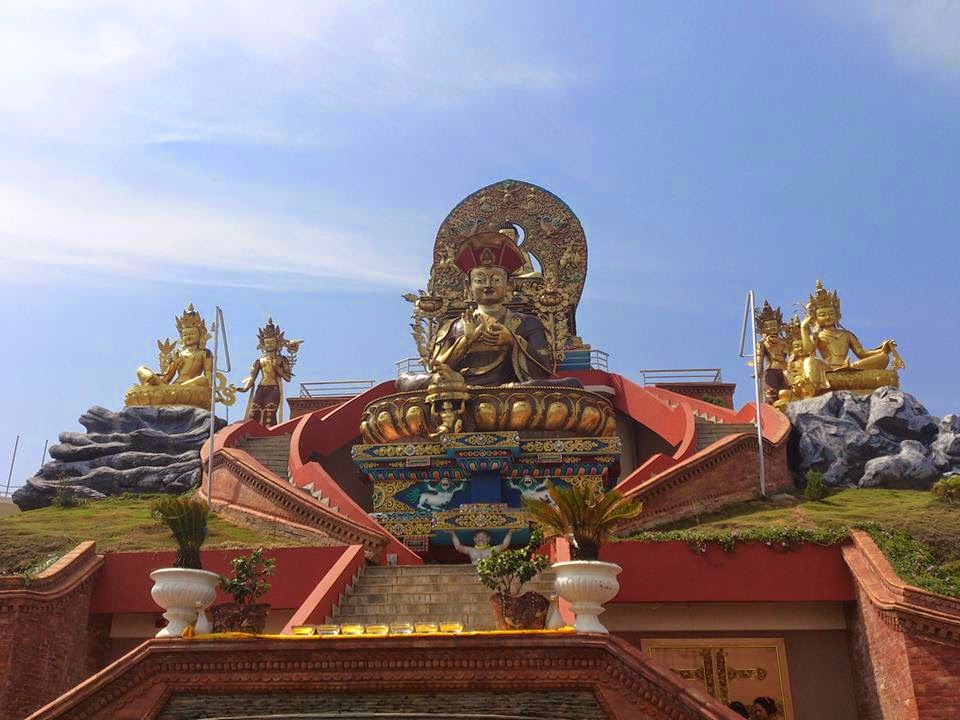 Popularly known as ‘Seto Gumba’ in Nepali is located on the north-west part of Kathmandu Valley. You can see the Tibetan Culture, architecture, statue and painting which reflects the Buddhism and its techniques. It is one of the best points to view Kathmandu city, as it showcases the valley in the most spectacular way. It is also the best view point for sunrise and sunset view. On a clear day you can even see the mountain range.

If you are travelling to Nepal feel free to consult with Nepal's number one tour company to arrange your advance nepal tour booking
www.nepalonetours.com Nepal Tour,Tour Nepal,Travel agency in Nepal

Posted by Nepal One Tours and Travels at 2:11 AM No comments: